Set in a diner where the food isn’t very good and the ambience veers between heaven and hell, this bestselling novel from the author of Mama Day and The Women of Brewster Place is a feast for the senses and the spirit. “A virtuoso orchestration of survival, suffering, courage and humor.”

This is a really hard book to review. I read it years ago and didn’t *quite* understand it.

This book – like The Women of Brewster Place – is set up as a series of short stories about individual characters and what brought the character to Bailey’s Cafe or Eve’s Boarding house for women (both places are “at a crossroads” and can only be located by a person in the crossroads of their life). Unlike The Women of Brewster Place, Bailey’s Cafe isn’t quite as well structured and feels very disjointed to me.

The characters are mostly engrossing, the stories are all extremely sad and mostly deal with women who have been abused sexually, physically, mentally or all three. The most haunting one that I remember was about a young girl who was so beautiful that she was molested by her father and treated as a sexual object until she scarred her own face.
END_OF_DOCUMENT_TOKEN_TO_BE_REPLACED

This book is also being sold as “Pleasuring Lord Scoundrel.”

The most notorious and most eligible bachelor in town is single! But not for long.

Rhea Davenport, a disgraced, impoverished lady currently working as a governess has captured the eye of Nathaniel Worthington. He plans to make her his mistress in order to satisfy the fiery lust that is ignited every time he is near her. He knows she will be able to assuage his hunger but will she be able to keep up with his libertine lifestyle? Most importantly how will he react when he finds out the truth about his sexy mistress.

I wasn’t a big fan. Not at all. It felt…contrived.

I’ve been trying to put my finger on what bothered me about this book.

The writing is fine and it seemed to be well formatted.

Elinor Prescott has come home at last…to Oakleigh, the gracious antebellum mansion that was home to generations of her Southern family. But the beautiful old house is a near-ruin and she can’t afford to restore it. Elinor hopes to find a buyer who will cherish the home as she does. But she has one rule – she won’t sell to handsome, self-made millionaire Cole Whittier.

Cole has the locals upset over his plans to build a factory nearby and Elinor’s leading the opposition. He’s got a fight on his hands to convince the stubborn beauty of the merits of his plans – and of everything else he discovers he wants to offer her.

It’s up to Cole to persuade Elinor to see things from his perspective. The sexy industrialist is convinced that Elinor is well worth winning over.

Always (or “The Angry Heroine”) by Carol Rose

I had a lot of problems with this book. There are a lot of good ideas but the bad execution destroys a lot of that promise. The story should have been right up my alley…but I found myself wanting to toss this book across the room on several different occasions. I also found myself putting it down and not coming back for long periods of time. In fact, I had to force myself to finish. That’s never a good sign. This book is in need of a good editor, STAT.*
END_OF_DOCUMENT_TOKEN_TO_BE_REPLACED 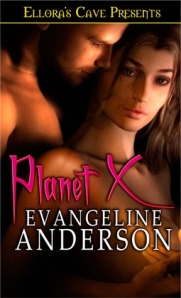 Krisa Elyison is a bride-to-be—bought and paid for by a stuffy aristocrat. Though she secretly longs for just one adventure all on her own, she knows the reality of her life—she is destined to be the wife of the elderly and pompous Lord Radisson.

Kurt Teague is a prisoner—a galactic criminal wanted for multiple murders. He is also Feral, a proud and savage people known for their indomitable wills to survive and their fiercely possessive natures. His tortured past has turned him into a ruthless killer—an unthinkable fate to the innocent, sheltered Krisa.

Resigned to her destiny, Krisa boards the starship that will take her to another planet and her loveless marriage. In the cargo hold, she stumbles across Teague—so fierce a prisoner he’s blindfolded and chained to a wall. Even so, her heart jumps at the sound of his deep, gravelly voice.

When the ship crashes onto an uncharted jungle planet, Krisa has no choice but to trust the menacing convict with both her virginity and her life. Yet, on a world filled with ravenous telepathic beasts and cannibalistic natives…Krisa discovers that the gorgeous and mysterious Teague may be the most dangerous animal of all.

Have you ever watched the movies Pitch Black or The Chronicles of Riddick starring Vin Diesel?

I want you to close your eyes for a moment. Imagine the main character from those movies. Think about Riddick’s defining characteristics. Think about how the movie Pitch Black opens with the meeting of the character Riddick.

Now add some hair, take away the glasses and you’ve met Teague from Planet X. This guy is Riddick all over again! He can see in the dark. He’s known as a scary killer and has a bounty on his head. His primary weapon of choice is a knife. The book even starts with the MCs meeting on a spaceship with Teague being held in the cargo bay as a criminal on his way to jail. The ship crash lands on a hostile planet. Any of that sound familiar??
END_OF_DOCUMENT_TOKEN_TO_BE_REPLACED

Cinder, Shikar warrior and strongest of the Incinerator Caste, has met his match in Steffy Michanke. He wants her as he has never wanted another and means to have her at any cost. Steffy, a woman with a dark past, wants nothing more than to break free from the sexy being who has vowed to protect her from the creatures that stalk them. Independent to a fault, she vows to deny the love that is promised in Cinder’s fiery kiss, no matter how much she may yearn for it. Danger threatens from every shadow. Love and death walk hand in hand. Cinder and Steffy must join forces. The Daemon Horde is coming.

Wanton Fire is the story of Cinder and Steffy. Steffy is a human DJ who is precognitive and she hears music in her head (nothing more is explained of this). Cinder is a Shikar warrior of the Incinerator caste (this means he can burn anything by touch and he can shoot fireballs from his fingertips). The Shikar is race of humanoids that live near the Earth’s core – in a slightly different dimension. The Shikar police the world gates to keep the Daemon Horde (a race of evil, ugly monsters that feed off of humans) off of the face of the Earth.

The Daemon Horde is getting stronger, faster, and more intelligent. They are developing new powers and getting closer to over-running the Earth.
END_OF_DOCUMENT_TOKEN_TO_BE_REPLACED 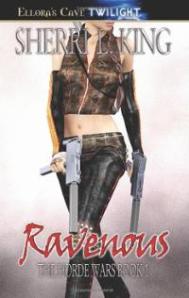 In a small Southern town where everyone knows everybody else’s business, Cady Swann has managed to keep a few secrets to herself…among them, the fact that every night for the past fifteen years she’s been protecting the town-probably the world-from a monstrous invasion of nether-worldly beasts. Unfortunately for Cady, someone has discovered her secret. Someone-or something-not quite human. Obsidian is a warrior, proud and fierce. He wants Cady to join his army in the war against their common foe. He also wants her to join him in his bed, to tempt and delight her into tying her life to his and leaving her world behind…forever.

Ravenous is the story of Cady and Obsidian (Sid). Cady is a human blessed with physic powers, super human speed and super human strength. Her family was killed in a Daemon Horde (a race of evil, ugly monsters that feed off of humans) attack on her home when she was a teenager. For 15 years she has fought the Daemon Horde in secret, trying to keep her small home town safe from destruction.

Obsidian is a Shikar warrior. The Shikar is race of humanoids that live near the Earth’s core – in a slightly different dimension. The Shikar police the world gates to keep the daemon horde off of the face of the Earth.
END_OF_DOCUMENT_TOKEN_TO_BE_REPLACED

Jules has got a score to settle against the drug dealers of Denver. Vance has made it his mission that Jules won’t get dead while dishing out vigilante justice. Jules doesn’t have time for romance, she’s too busy saving the world and she enlists Zip (the gunstore owner), Heavy (an ex-PI) and Frank (a mysterious recluse) to help.

The Rock Chicks of Fortnum’s Bookstore get involved to provide romantic advice and guidance, none of which Jules accepts at first. The Hot Bunch of Nightingale Investigations adopt Jules as one of their own. Even though Jules tries to hang on to her inner Head Crackin’ Mamma Jamma, the Rock Chicks; Hot Bunch; Jules’s long-suffering Uncle Nick; Jules’s friend the rotund, African-American, Jackie-O wannabe, May; and especially Vance will stop at nothing to wear her down.

But Jules makes some bad guys pretty angry and one is dedicated to taking her out. Vance and the Hot Bunch have to pull out all the stops to keep her alive. At the same time, Jules and Vance learn the true meaning of home but once they find this precious entity they’ve been searching for all their lives, will Jules’s enemies tear it away?

NOTE: I read about 70% of this book before the RAGE took over and I had to quit. Then (crack being what it is) I skimmed the rest of the book. I would still consider this a DNF.

I can’t say I haven’t been entertained by reading Kristin Ashley books. I’ve had the shit entertained out of me…but this is NOT a writer that I would let a young girl read. Kristen Ashley books seems to glorify having a strange man walk into a woman’s life and tell her what to do. In a very stalker-like abuser-like way.
END_OF_DOCUMENT_TOKEN_TO_BE_REPLACED