Jules has got a score to settle against the drug dealers of Denver. Vance has made it his mission that Jules won’t get dead while dishing out vigilante justice. Jules doesn’t have time for romance, she’s too busy saving the world and she enlists Zip (the gunstore owner), Heavy (an ex-PI) and Frank (a mysterious recluse) to help.

The Rock Chicks of Fortnum’s Bookstore get involved to provide romantic advice and guidance, none of which Jules accepts at first. The Hot Bunch of Nightingale Investigations adopt Jules as one of their own. Even though Jules tries to hang on to her inner Head Crackin’ Mamma Jamma, the Rock Chicks; Hot Bunch; Jules’s long-suffering Uncle Nick; Jules’s friend the rotund, African-American, Jackie-O wannabe, May; and especially Vance will stop at nothing to wear her down.

But Jules makes some bad guys pretty angry and one is dedicated to taking her out. Vance and the Hot Bunch have to pull out all the stops to keep her alive. At the same time, Jules and Vance learn the true meaning of home but once they find this precious entity they’ve been searching for all their lives, will Jules’s enemies tear it away?

NOTE: I read about 70% of this book before the RAGE took over and I had to quit. Then (crack being what it is) I skimmed the rest of the book. I would still consider this a DNF.

I can’t say I haven’t been entertained by reading Kristin Ashley books. I’ve had the shit entertained out of me…but this is NOT a writer that I would let a young girl read. Kristen Ashley books seems to glorify having a strange man walk into a woman’s life and tell her what to do. In a very stalker-like abuser-like way.
END_OF_DOCUMENT_TOKEN_TO_BE_REPLACED 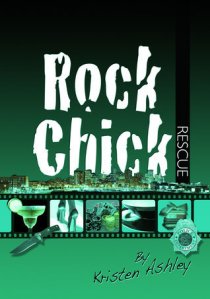 Jet McAlister has a secret. Eddie Chavez has the hots for Jet (not to mention, Eddie’s just, plain hot). Jet has too many problems to realize that Eddie’s interested. Eddie loses patience when Jet ends her waitressing shift at a strip club with a knife at her throat. Since Eddie’s a cop, he figures he can help. Since Jet’s used to solving everyone’s problems, she doesn’t want Eddie’s help. Throw in a Dolly Parton look-alike, a gruff but lovable strip club owner, Jet’s ne’er-do-well father, his ne’er-do-well friend, Bear, Bear’s long-suffering, chain-smoking wife Lavonne and the crew from Rock Chick and you’ve got Rock Chick Rescue. Rock Chick Rescue takes you on a wild ride with Jet, Eddie and the gang as they wrestle bad guys in a bagel shop, hit Denver’s backstreet poker tables (with big hair), and help the strippers at Smithie’s take down a would-be murderer.Through this, Jet’s got to learn that, even when life made you give up your dreams, you can still end up with the (hot) guy. Eddie’s got to rescue Jet from a bad man (so he can do better things with her) and teach her that some dreams can come true.

What can I say? These books are like crack.

I don’t know, I kinda hated this heroine. She did stupid shit quite often, she was always putting herself down and she wasn’t that much fun. And I hated her break up reason, too. Gah.

Normal shenanigans ensue. Of course there is a kidnapping. Technically two. As always, a little too long.

Rating Caveat: The rating is based on a how I feel about this book in comparison to all of the other KA books I have read. Also, I have never rated any of the KA books I’ve read on grammar, sentence structure, editing or formatting. I knew what I was getting myself into before I started reading.

Indy Savage, cop’s daughter, rock chick and used bookstore owner, has been in love with Lee Nightingale, once bad boy, now the man behind Nightingale Investigations, since she was five years old. No matter what ingenious schemes Indy used to capture his attention, Lee never showed an interest and Indy finally gave up. Now Indy’s employee, Rosie, has lost a bag of diamonds and bad guys are shooting at him. When Indy gets involved, Lee is forced to help. Complicating matters, Lee has decided he’s interested, Indy’s decided she’s not. But she can’t seem to keep Lee out of her life when she’s repeatedly stun gunned, kidnapped and there are car bombs exploding (not to mention she’s finding dead bodies).

Indy’s best bet is to solve the mystery of the diamonds before Lee. Lee’s challenge is to keep Indy alive and, at the same time, win back her heart.

Goodreads Prompt: What did I think?

I thought that Lee was much less of a knuckle dragging cave man than Tack from Motorcycle Man. That made him a lot easier to deal with.
END_OF_DOCUMENT_TOKEN_TO_BE_REPLACED